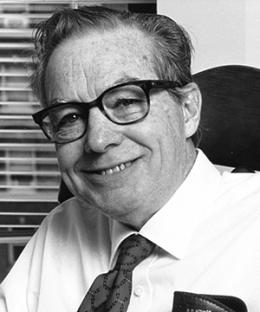 “He was a real pillar of Columbia Law School, both a graduate and a distinguished and loyal faculty member,” said David M. Schizer, Dean and Lucy G. Moses Professor of Law.

Jones attended Columbia Law School after receiving his bachelor’s degree from Columbia College—where he was valedictorian—he graduated at the top of the Law School's Class of 1954, after serving as editor-in-chief of the Columbia Law Review.

Jones then clerked for U.S. Supreme Court Justice Tom C. Clark. After five years as a lawyer for the Secretary of the Air Force, and in private practice, Jones joined the Law School faculty in 1959.

Jones focused on such areas as Antitrust, Contracts, Defamation, Regulated Industries, and Torts.

A book on his views about the jurisprudence surrounding defamation and falsehoods, Insult to Injury: Libel, Slander and Invasions of Privacy, was published in 2003.

“What I remember of Kenny was his extraordinary integrity—a man of unflinching principle, who never hesitated to put his strong views before us, often enough in isolation,” said Peter L. Strauss, Betts Professor of Law, “and yet he was the colleague we invariably trusted to recall faculty history and practice, to count and report our secret ballots, and in so many other ways to represent our highest aspirations for ourselves.”

Barbara Aronstein Black ’55, George Welwood Murray Professor Emerita of Legal History, was a year behind Jones at the Law School and joined the Columbia Law Review when he was editor-in-chief.

“I was in awe of this brilliant young man—and well remember occasions on which a group of us would be sitting around the outer office, chewing over some knotty problem, unable quite to untangle it all—then someone would yell ‘hey Kenny’, and he’d come out of his office, listen to us and give us an instant analysis by which everything fell into place,” Black said.

Professor Kent Greenawalt ’63 said Jones was one of his favorite professors when he attended the Law School. “Without the aid of dramatic flair, he used a problem method in a way that stimulated the best students and brought incredible clarity of explanation that made material comprehensible for all students,” Greenawalt said.

Jones also served from 1970 to 1974 on the New York State Public Service Commission, which regulates utilities, and was deputy chairman of the commission from 1972 to 1974.

Jones retired from the Law School in 2001 as Charles Evans Hughes Professor of Law Emeritus.