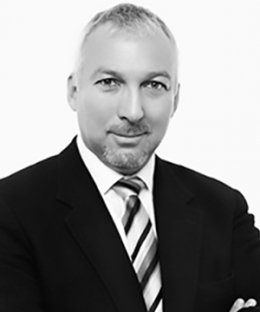 Toby Butterfield is a partner with Frankfurt Kurnit Klein & Selz in the firm’s litigation and intellectual property groups.

He is also an adjunct professor at Benjamin N. Cardozo School of Law, where he teaches on media and entertainment Law. He has 20 years of experience litigating and counseling on copyright, trademark, defamation, digital media, and commercial matters.

His recent work includes successfully representing the owner and publisher of Business Traveller magazine in a trademark licensing dispute with a competitor; settlement of CBS v. FilmOn, a case involving claims by the major networks against a streaming media technology company; and obtaining emergency injunctive relief for HIT Entertainment, Inc., which owns Barney, Thomas the Tank Engine, and Bob the Builder. The injunctive relief effectively shut down the manufacturer and distributor of counterfeit adult costumes of those well-known characters.

He authored “Coming to Terms: Hidden Traps for Media Entities and Producers in Website Terms of Use” in Landslide, 1991, and “Defamation” (with Kai Falkenberg) in Counseling Content Providers in the Digital Age, NYSBA, 2010. Butterfield also regularly writes for Media Law Resource Center publications on fair use, copyright termination, the Digital Millennium Copyright Act, and other topics.

Prior to joining the firm, Butterfield was a partner at Cowan, DeBaets, Abrahams & Sheppard. He is admitted to practice in New York state and federal courts, including the Supreme Court, the 2nd U.S. Circuit Court of Appeals, and District Courts for the Southern and Eastern Districts of New York.

Butterfield received his J.D. from the New York University School of Law and his B.A. from the University of Oxford.