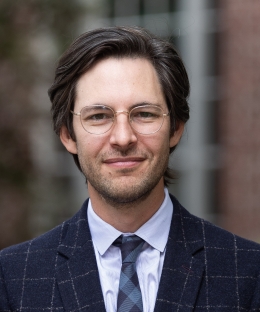 Before joining Columbia Law—as an academic fellow and lecturer in law in 2020 and then as associate professor of law on July 1, 2022—Schmidt practiced law for over six years, specializing in U.S. Supreme Court and appellate litigation, and he handled a number of landmark cases. He represented the plaintiffs in Trump v. Hawaii—the challenge to President Donald Trump’s travel ban—from the initial complaint to the Supreme Court. He litigated successful challenges to two of the Trump administration’s asylum bans; he represented the governor of Pennsylvania and state election officials in the Supreme Court in a case about the legality of partisan gerrymandering; and he helped handle a challenge to Trump’s dismantling of the Bears Ears National Monument. He also argued a precedent-setting case in the U.S. Court of Appeals for the Federal Circuit about venue in patent cases, which has been cited in more than 50 subsequent federal decisions.

While studying at Yale Law School, Schmidt was a projects editor for the Yale Law Journal, an executive editor of the Yale Journal of Law and the Humanities, and the student co-director of the Global Constitutionalism Seminar. He clerked for Judge Merrick Garland on the U.S. Court of Appeals for the D.C. Circuit and Justice Stephen Breyer on the Supreme Court. He is admitted to practice in New York, the U.S. Supreme Court, and numerous federal lower courts.

| Yahoo Finance
In The Media