Sarah A. Seo ’07 is a legal historian of criminal law and procedure in the 20th-century United States. Her recent book, Policing the Open Road: How Cars Transformed American Freedom, examines the history of the automobile to explain the evolution of the Fourth Amendment and to explore the problem of police discretion in a society committed to the rule of law. The book was named one of 2019’s ten best history books by Smithsonian Magazine and received several prizes, including the Order of the Coif Book Award, the Littleton-Griswold Prize from the American Historical Association, and the Ralph Waldo Emerson Award from Phi Beta Kappa Society. In addition to publishing in academic journals, Seo has written for The Atlantic, Boston Review, Lapham’s Quarterly, Le Monde Diplomatique, The New York Review of Books, and The Washington Post.

Seo clerked for Judge Denny Chin, then of the U.S. District Court for the Southern District of New York, and Judge Reena Raggi of the U.S. Court of Appeals for the 2nd Circuit. Seo taught at Iowa Law School before joining the Columbia Law School faculty in 2020. 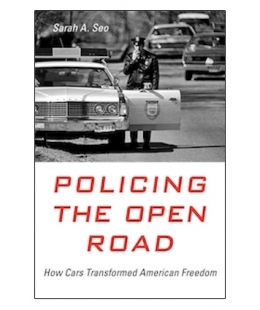 How the rise of the car, the symbol of American personal freedom, inadvertently led to ever more intrusive policing—with disastrous consequences for racial equality in our criminal justice system.

Order of the Coif Book Award

Her book on the history of policing and cars illuminates the legal decisions that have led to ‘driving while Black.’

The Deep Roots of Sexual Policing in America

| The Atlantic
In The Media

Cities Try to Turn the Tide on Police Traffic Stops

| The New York Times
In The Media

Monsters: Cars, Which Are Killing Us and the Planet

Faculty Insight: Sarah A. Seo on Cops, Cars, and Discretion vs. Discrimination