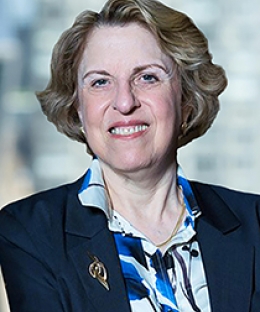 Rosalyn Richter is senior counsel in the complex litigation group of Arnold & Porter.  Prior to joining the firm in October 2020, she was an Associate Justice on the New York State Appellate Division First Department, having been appointed to that position in March 2009. Her state court judicial service began in 1990 and she served in NYC Criminal Court, the Midtown Community Court, and Manhattan Supreme Court.

She currently chairs the New York State Courts Advisory Committee on Access for People with Disabilities, and is a member of the NYS Permanent Judicial Commission on Justice for Children.  She is a former member of the Criminal Jury Instruction Committee and the Commercial Division Advisory Committee. She is active in numerous bar associations, and is the former co-chair of the Committee to Enhance Diversity in the Profession of the NYC Bar Association.

She taught at Brooklyn Law School and New York Law School, and is a faculty member of the New Federal & State Appellate Judges Seminar sponsored by the Institute of Judicial Administration at New York University Law School.

Prior to her appointment to the state court bench, she was an Administrative Law Judge at the NYC Office of Administrative Trials and Hearings, and a supervisor in the appeals bureau of the Brooklyn District Attorney's Office. Shortly after her graduation from law school, she became Executive Director of Lambda Legal Defense & Education Fund, and directed a Lambda project to help develop a legal response to then pending anti-gay legislation.

Richter graduated from Barnard College in 1976, and Brooklyn Law School in 1979.