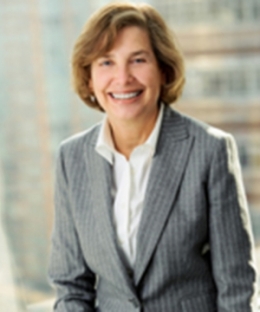 Marion Backrach has been an adjunct professor of law at Cornell Law School since 2008. She teaches ethical issues in criminal investigation, prosecution, and policy.

Bachrach has extensive experience as a litigator in white-collar criminal matters and complex civil suits. She is a founding member of the law firm of DePetris & Bachrach. Bachrach has an active practice on behalf of institutional and individual clients, and has had considerable experience counseling professionals, particularly lawyers.

After graduating from law school, she clerked for the Honorable Joseph L. Tauro, United States District Judge for the District of Massachusetts. Thereafter, she worked as a litigator at Paul, Weiss, Rifkind, Wharton & Garrison. Bachrach served as an assistant U.S. attorney in the Eastern District of New York for six years. During that time, she tried and supervised a variety of criminal prosecutions and significant white-collar criminal cases and held the additional positions of chief of general crimes and deputy chief of the criminal division. In 1986, she returned to private practice, specializing in white-collar criminal defense as well as civil and regulatory cases, including forfeiture matters.

She is a founding member of the New York Council of Defense Lawyers, a current member of its board of directors, and former co-chair of its sentencing guidelines committee.

She has co-authored the chapter “False Testimony by Government Witnesses” (with Diana D. Parker) in the book Defending Federal Criminal Cases, Law Journal Press, 2006. She has also co-authored a number of articles in the New York Law Journal with her law partner, Ronald DePetris.

Bachrach earned her J.D. from Cornell Law School in 1977 and her B.A. from Syracuse University in 1972.