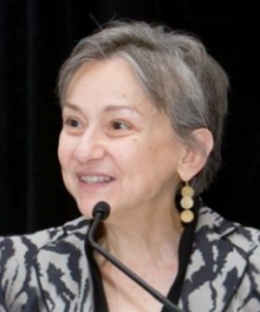 Maria Foscarinis is founder and former executive director of the National Homelessness Law Center (formerly known as the National Law Center on Homelessness & Poverty), a not-for-profit organization based in Washington, D.C., that uses the power of the law to end and prevent homelessness in the United States. Foscarinis has advocated for solutions to homelessness at the national level since 1985. She is a primary architect of the McKinney-Vento Homeless Assistance Act and has led successful litigation to secure the legal rights of homeless persons. She regularly speaks and lectures on law, public policy, and homelessness and is frequently quoted in print and electronic media.

Foscarinis is a 1977 graduate of Barnard College and a 1981 graduate of Columbia Law School, where she was Notes and Comments editor of the Law Review; she also holds a Master of Arts degree in Philosophy from Columbia’s Graduate School of Arts and Sciences. After law school, she clerked for the Honorable Amalya L. Kearse on the U.S. Court of Appeals for the Second Circuit, then joined the litigation group at Sullivan & Cromwell. She established and directed the Washington, D.C. office of the National Coalition for the Homeless before founding the National Law Center on Homelessness & Poverty in 1989. Among other honors, Foscarinis is the recipient of the 2006 Public Interest Achievement Award from the Public Interest Law Foundation at Columbia Law School, the 2016 Katharine and George Alexander Law Prize from Santa Clara University’s School of Law, and a Rockefeller Foundation Practitioner Residency in Bellagio, Italy (2021). She was named a Human Rights Hero by the American Bar Association’s Human Rights Magazine (2019). She serves on the Law School’s Public Interest/Public Service Practitioner Advisory Board.