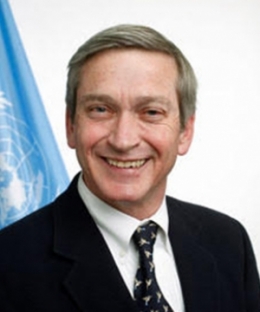 Johnson joined the United Nations Office of Legal Affairs in 1971 as an assistant legal officer in the codification division and, prior to his last posting at its headquarters, served as principal legal officer in the Office of the Legal Counsel. Among his special assignments was serving as chief of staff to the special representative of the secretary-general, United Nations Protection Force in the former Yugoslavia.

He previously taught at the University of California, Davis, School of Law as the Homer G. and Ann Berryhill Angelo Visiting Professor of International Law from 2001 to 2002 and as Visiting Professor of International Law at the Fletcher School of Law and Diplomacy, Tufts University 2005 to 2006, as well as at other academic institutions. Among the organizations to which he belongs are the Council on Foreign Relations and the New York City Bar Association.

Johnson received his J.D. from Harvard Law School in 1970 and his M.P.A. from the JFK School of Government at Harvard University in 1971, and his B.A. from the University of Nebraska in 1967.