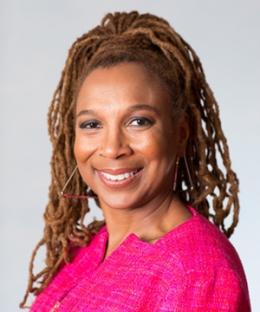 Kimberlé W. Crenshaw is a pioneering scholar and writer on civil rights, critical race theory, Black feminist legal theory, and race, racism and the law. In addition to her position at Columbia Law School, she is a Distinguished Professor of Law at the University of California, Los Angeles.

Crenshaw’s work has been foundational in critical race theory and in “intersectionality,” a term she coined to describe the double bind of simultaneous racial and gender prejudice. Her studies, writing, and activism have identified key issues in the perpetuation of inequality, including the “school to prison pipeline” for African American children and the criminalization of behavior among Black teenage girls. Through the Columbia Law School African American Policy Forum (AAPF), which she co-founded, Crenshaw co-authored (with Andrea Ritchie) Say Her Name: Resisting Police Brutality Against Black Women, which documented and drew attention to the killing of Black women and girls by police. Crenshaw and AAPF subsequently launched the #SayHerName campaign to call attention to police violence against Black women and girls.

Crenshaw is a sought-after speaker and conducts workshops and trainings. She is also the co-author of Black Girls Matter: Pushed Out, Overpoliced, and Underprotected. Her writing has appeared in the Harvard Law Review, the National Black Law Journal, the Stanford Law Review, and the Southern California Law Review. She is a founding coordinator of the Critical Race Theory workshop and co-editor of Critical Race Theory: Key Documents That Shaped the Movement. In 1981, she assisted on the legal team of Anita Hill during her testimony at the confirmation hearing of Supreme Court Justice Clarence Thomas.

Crenshaw writes regularly for The New Republic, The Nation, and Ms. and provides commentary for media outlets, including MSNBC and NPR, and hosts the podcast Intersectionality Matters! In addition to frequent speaking engagements, training sessions, and town halls, Crenshaw has facilitated workshops for human rights activists in Brazil and in India and for constitutional court judges in South Africa. She serves on the Committee on Law and Justice of the National Academies of Science.

Crenshaw’s groundbreaking work on intersectionality was influential in the drafting of the equality clause in the South African Constitution. She authored the background paper on race and gender discrimination for the United Nations’ World Conference on Racism in 2001, served as the rapporteur for the conference’s expert group on gender and race discrimination, and coordinated NGO efforts to ensure the inclusion of gender in the WCAR Conference Declaration.

Joseph B. and Toby Gittler Prize

Professor of the Year at UCLA Law School

“Intersectionality is a lens through which you can see where power comes and collides, where it interlocks and intersects. It’s not simply that there’s a race problem here, a gender problem here, and a class or LBGTQ problem there.”

Read All Stories More in The News
In The News

What Does Intersectionality Mean?