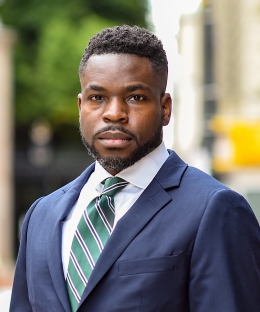 Constitutional Law
Law and Democracy
Race and the Law

Kerrel Murray teaches and writes about constitutional law, election law, and race and the law, among other topics. His scholarship interrogates what democracy demands of our legal rules and institutions as well as the role of law in mediating conflict and disagreement. Before joining Columbia Law School in 2021, he completed a two-year fellowship as a post-doc research associate at the University of North Carolina School of Law. Prior to that, Murray served as a fellow at the NAACP Legal Defense and Educational Fund, where he co-authored amicus briefs in the U.S. Supreme Court and multiple state supreme courts. He was also an associate in Covington & Burling’s Washington, D.C., office, where he focused on complex civil litigation. He clerked for then-Judge Ketanji Brown Jackson on the U.S. District Court for the District of Columbia and for Judge Timothy M. Tymkovich on the U.S. Court of Appeals for the 10th Circuit.

Murray is currently on leave serving in the federal government.

A constitutional law scholar, Murray writes about race and antidiscrimination law and election law. He joins the Columbia Law School faculty as an associate professor of law.