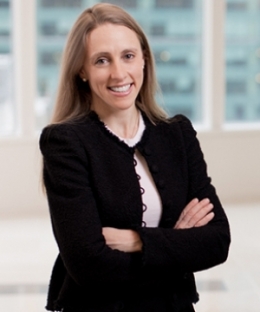 Jennifer Sokoler is a counsel in O’Melveny’s New York office, and focuses her practice on appellate matters. She joined the firm in January 2017, after serving as a Policy Fellow for United States Ambassador to the UN Samantha Power (2015-16), a Research Fellow for UN Human Rights Committee Member Sarah H. Cleveland (2015), and Litigation Fellow for the Center for Reproductive Rights (2012-14). She also completed clerkships with the Honorable Sonia Sotomayor, Supreme Court of the United States (2014-15), the Honorable Robert A. Katzmann, U.S. Court of Appeals for the Second Circuit (2011-12), and the Honorable Denise Cote, U.S. District Court for the Southern District of New York (2010-11).