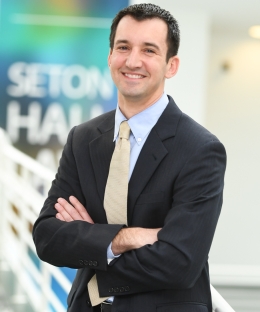 Professor Elberg is Faculty Director of the Center for Health & Pharmaceutical Law at Seton Hall University School of Law, where he teaches in the areas of Health Law, Health Care Fraud and Abuse, Evidence, and Data Analytics. His areas of interest include corporate crime and compliance, the role of various actors in the enforcement of health care fraud laws and regulations, and criminal justice policy. He was selected as Seton Hall Law School Faculty Teacher of the Year in 2021.

Prior to joining Seton Hall Law School, Professor Elberg served for 11 years as an Assistant U.S. Attorney at the U.S. Attorney’s Office for the District of New Jersey. As Chief of the Office’s Health Care & Government Fraud Unit for five years, Professor Elberg led one of the largest and most impactful health care units in the country, supervising a team of 15 AUSAs and directing all of the Office’s criminal and civil investigations and prosecutions of health care fraud offenses, including investigations and prosecutions of fraud against the government and private health insurance plans, illegal kickback schemes, violations of the Federal Food, Drug & Cosmetic Act, and the improper diversion of prescription drugs including opioids, as well as all health care-related actions brought by the Office under the False Claims Act. In addition, Professor Elberg supervised and directed investigations regarding Foreign Corrupt Practices Act violations, as well as fraud against certain other government agencies and programs. Professor Elberg launched the District of New Jersey’s Data Mining Working Group and spearheaded the Office’s efforts to utilize data analytics to identify, investigate, and prosecute health care fraud offenses.

In 2013, Professor Elberg was awarded the Department of Justice’s Executive Office of U.S. Attorneys Director’s Award for Superior Performance as an AUSA for his investigation and prosecution of Maxim Healthcare Services, et al., which resulted in a recovery of $150 Million (the largest ever in a home healthcare case), as well as the felony convictions of nine individuals in six states, including three senior executives of one of the nation’s largest home healthcare companies. In 2016, Professor Elberg led the prosecution of Olympus Corp., resulting in a $646 million global criminal and civil resolution for violations of the Anti-Kickback Statute and the Foreign Corrupt Practices Act – the largest total amount paid in U.S. history for violations involving the Anti-Kickback Statute and the largest resolution of any kind involving a medical device company. In 2018, Professor Elberg was awarded the Health & Human Services Office of Inspector General Award for Fighting Fraud, Waste, and Abuse for leading the investigation and prosecution of Biodiagnostic Laboratory Services, which resulted in 53 convictions, including 38 physicians – the largest number of medical professionals ever prosecuted in a bribery case.

Professor Elberg has been a leading speaker throughout the country on issues relating to health care fraud and abuse. He has been called upon to teach Department of Justice criminal and civil health care prosecutors from across the country on several occasions, including at the conference launching Deputy Attorney General Sally Yates’s Individual Accountability Initiative.

Professor Elberg’s scholarship has been published in the Wisconsin Law Review, Washington Law Review, Utah Law Review, and the New England Journal of Medicine. His article, A Path to Data-Driven Health Care Enforcement, was competitively selected for presentation at the 2019 Health Law Scholars Workshop co-sponsored by Saint Louis University Center for Health Law Studies and the American Society of Law, Medicine & Ethics.